Ana de Armas taking on the role of Marilyn Monroe made headlines when it was first announced, but the major talking point about the film Blonde was her accent.

There’s no denying the uncanny resemblance that she had to the iconic figure, but everyone was concerned about her Cuban accent slipping through every once in a while.

She sat down with Variety to talk about bringing Marilyn Monroe to life. In the video interview, Ana said that it took seven months from the audition to the movie being greenlit with her in the role.

“Because we had time, I was working with a dialect coach every day, several hours a day, watching her films, reading the book, just on YouTube all day long just finding random videos of her and interviews and footage and audios and everything I could find,” she said about her process at the beginning of production.

The 34-year-old actress shared that her “biggest worry” was the voice. “Just because it’s so iconic and so specific, and English is not my first language to begin with.” She added that Marilyn Monroe’s voice “was [her] biggest fear.”

“There are so many aspects in a voice. It’s not just the accent. That’s just one thing. The most important thing for me was to capture the essence of what that was and what was she trying to do by talking like that.”

She explained that throughout Marilyn Monroe’s career, her accent changed depending on what movie she was filming.

“So her accent, itself, was all over the place,” Ana said. “Her voice was consistent, which is very different. So it was hard. It was a hard process.”

When talking about taking on the role, Ana decided that she wasn’t going to imitate Marilyn Monroe. “If I try to do that, I’ll fail. It’s just not possible.”

She shared that the only way for her to successfully inhabit the role is “to connect with her, to understand her. Her background, her childhood. So, for me, the work had to be focused on her emotions, her feelings.” 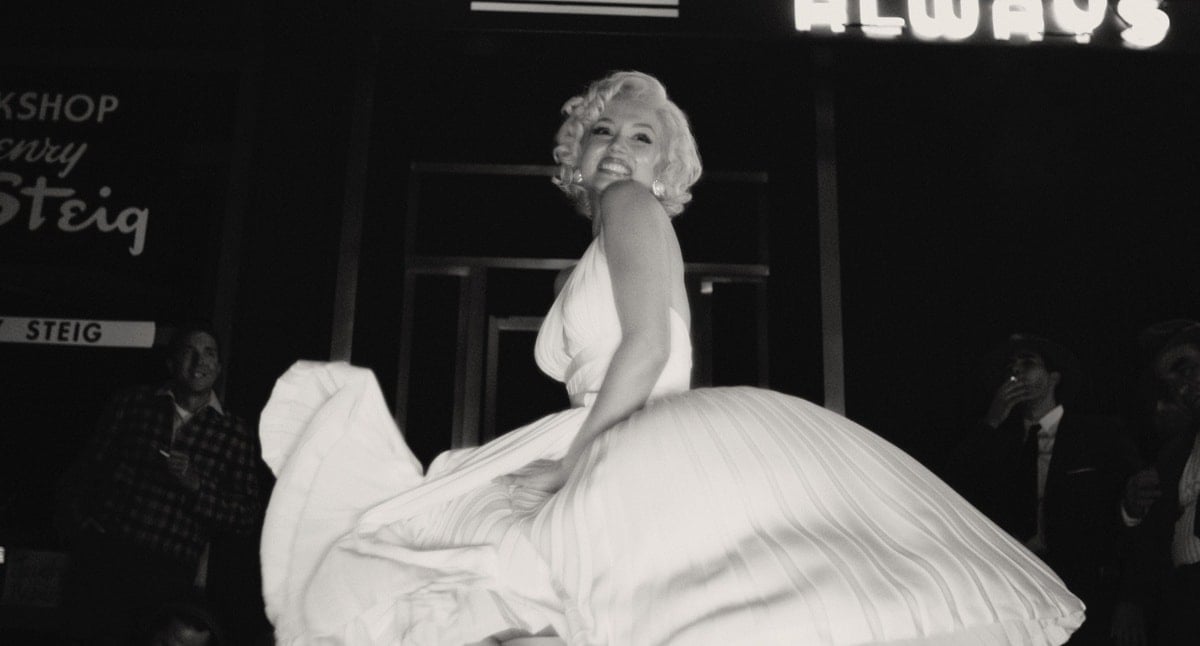 Ana de Armas said that it was just not possible to imitate Marilyn Monroe for Blonde (Credit: Netflix)

“And, of course, the costumes also helped a huge deal because you’re in it and you’re feeling it,” Ana added.

She also talked about how every little thing was “so tied up to what [Marilyn Monroe] was feeling.” Everything from her body to her posture.

“When you start understanding what she was feeling, and then you watch how she moves – it all makes sense. It’s like you understand why she’s doing that.”

The Cuban actress also mentioned that there were times when she was insecure while filming. “I was scared. I felt the pressure. I felt observed or judged – or at least that’s what was going on in my head.”

So how did she get out of that negative mindset?

Ana shared, “every time when I was struggling with that, Andrew [Dominik] would come to me and tell me, ‘That’s it. Go with it because that is literally what she’s going through. That is exactly what she’s feeling, so just more. Just more.’”

The Blonde actress made two recent guest appearances on late-night talk shows to promote her film. One was for The Late Show With Stephen Colbert. 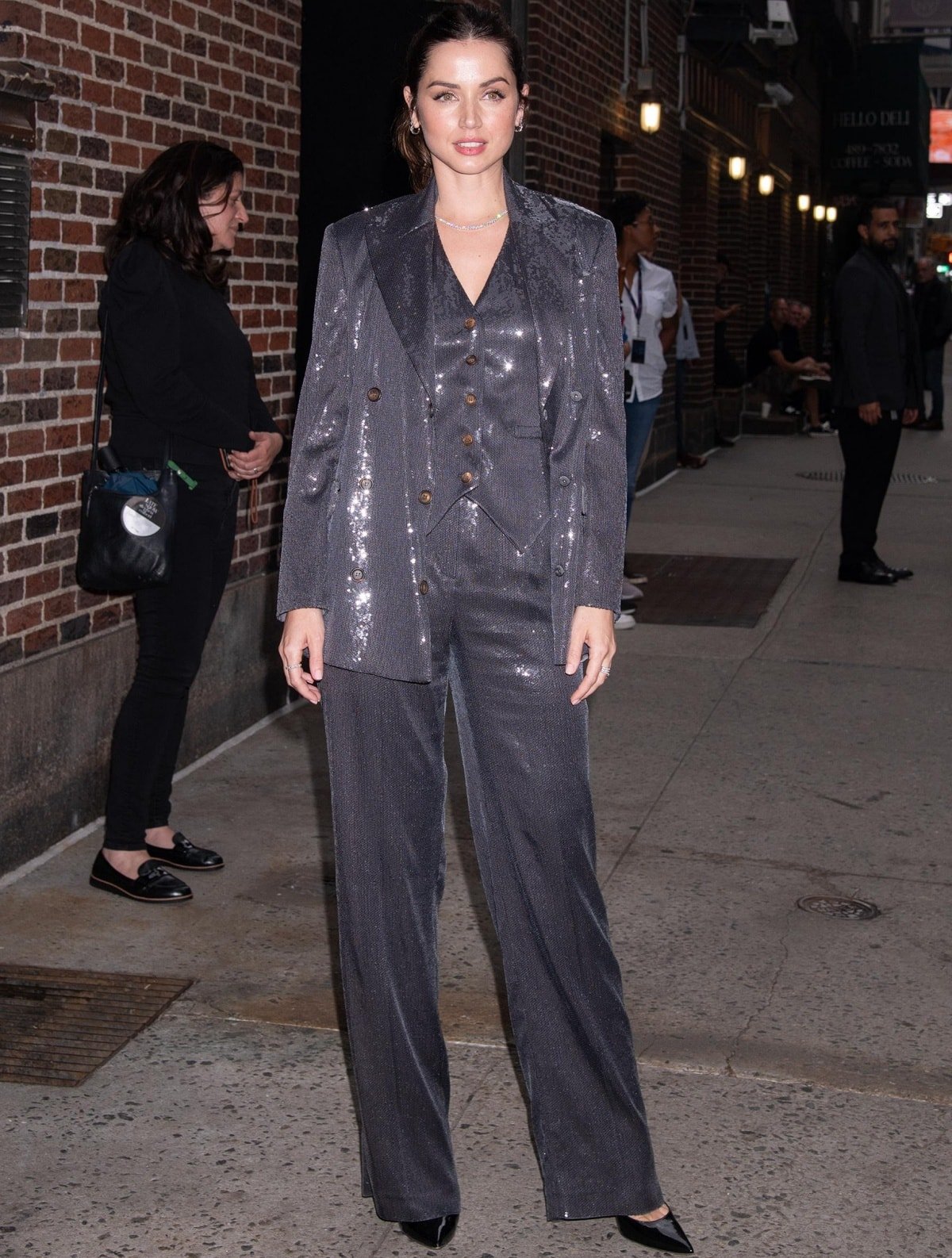 We’re used to seeing Ana in a series of Louis Vuitton looks, so it was a nice surprise to see her change it up. This time, she wore a three-piece suit with sequin embellishments from Brunello Cucinelli’s Spring 2022 collection.

Ana wore a double-breasted jacket over a waistcoat with high-rise trousers. The sequined suit shimmered on its own, so all she needed was her diamond Hepburn choker and ear jewelry from Anita Ko, and black pointy-toe heels. 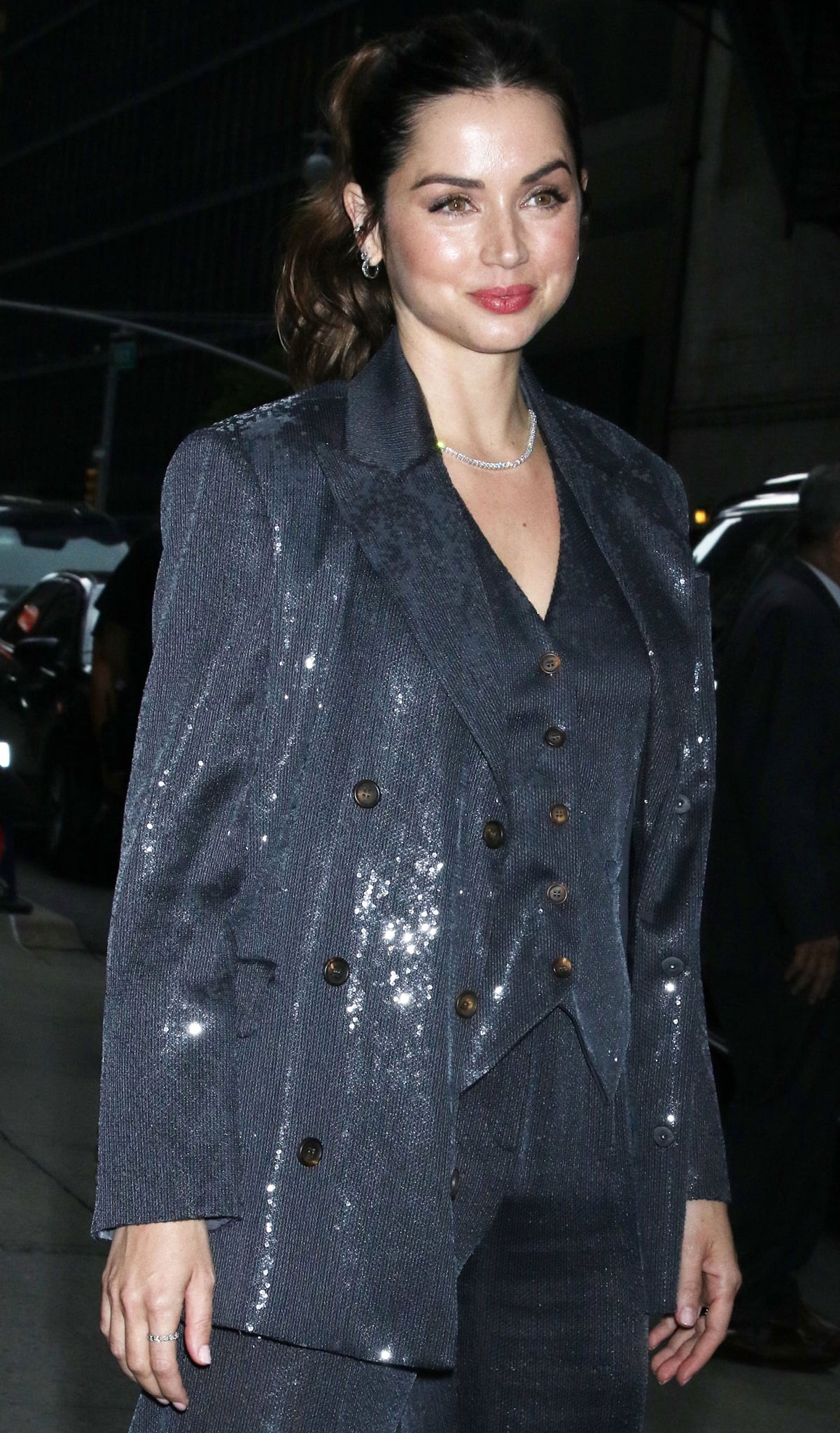 On her guest stint, she talked about not thinking at all that she looked like Marilyn Monroe. She also mentioned that it was during take three of her audition that director Andrew Dominik knew that Ana de Armas was his Marilyn.

Growing up in Cuba, she said that she wasn’t as aware of Marilyn Monroe as she is now. “It was later on where I started watching films after studying in drama school that I realized this is Marilyn Monroe and what she meant.”

For Ana, getting the role is “almost close to a miracle.” She said that this type of role “was not supposed to come [her] way.”

And it’s not “because I’m Latina and Cuban. They don’t just exist in general. Like, this is something very, very special. So the opportunity for me to play this part was, you know, a dream.”

Ana’s second stop was at Late Night with Seth Meyers, where she oozed vintage glamour. She wore a black silk midi dress from Alessandra Rich, which you can get for $1,925 at Net-A-Porter.

It features mutton sleeves, a sweetheart neckline, a pleated skirt, a polka-dot pattern, and a bow detail. She cinched it at the waist with a chain belt from Alessandra Rich that has a daisy embellishment. 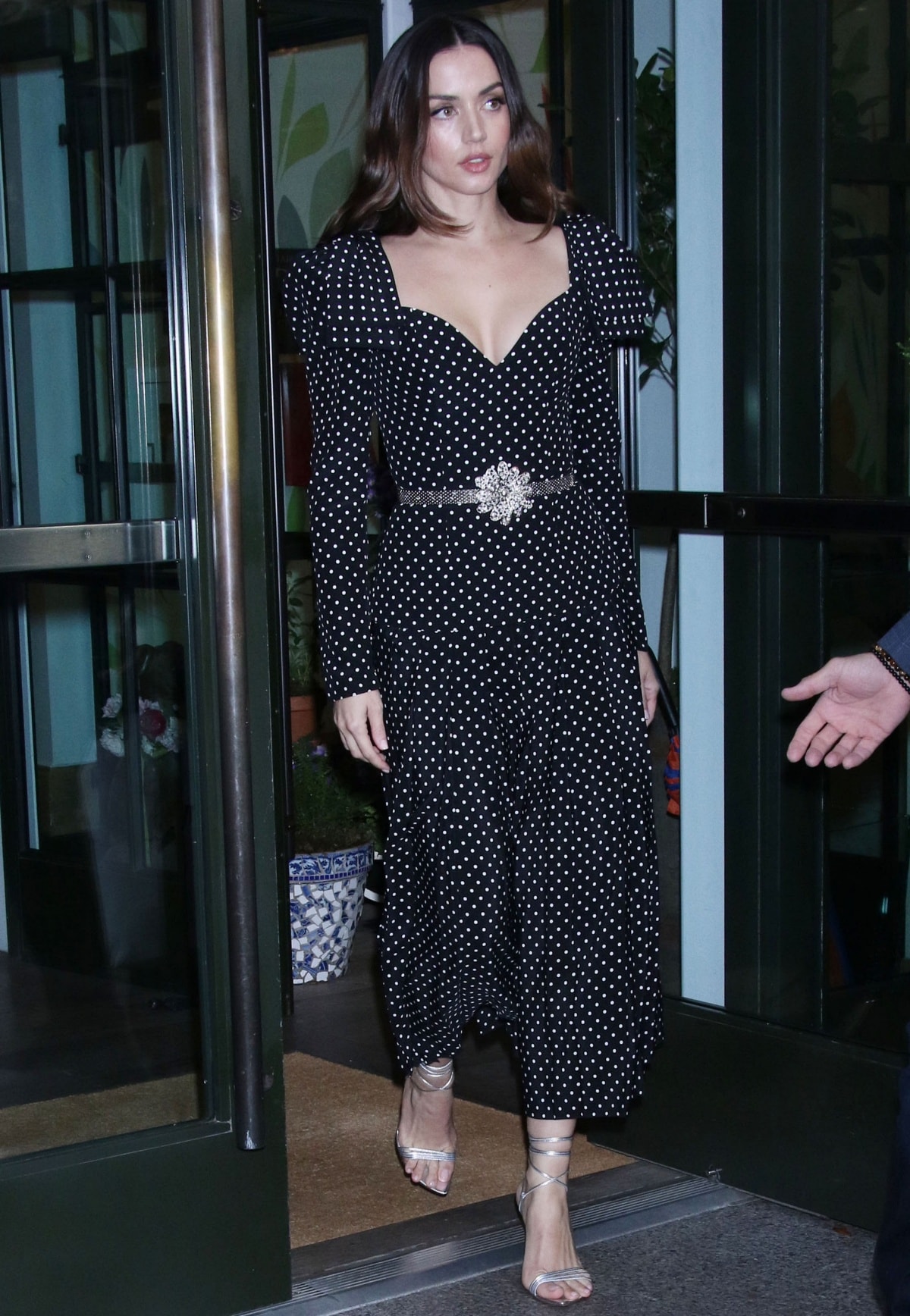 On her feet are Aquazzura Trouble Maker sandals that you can buy at Farfetch. These shoes were crafted from polished silver laminated nappa leather. They feature slender ankle ties, stiletto heels, and an open-toed design.

You can also get them in soft gold at Shopbop and Saks Fifth Avenue. 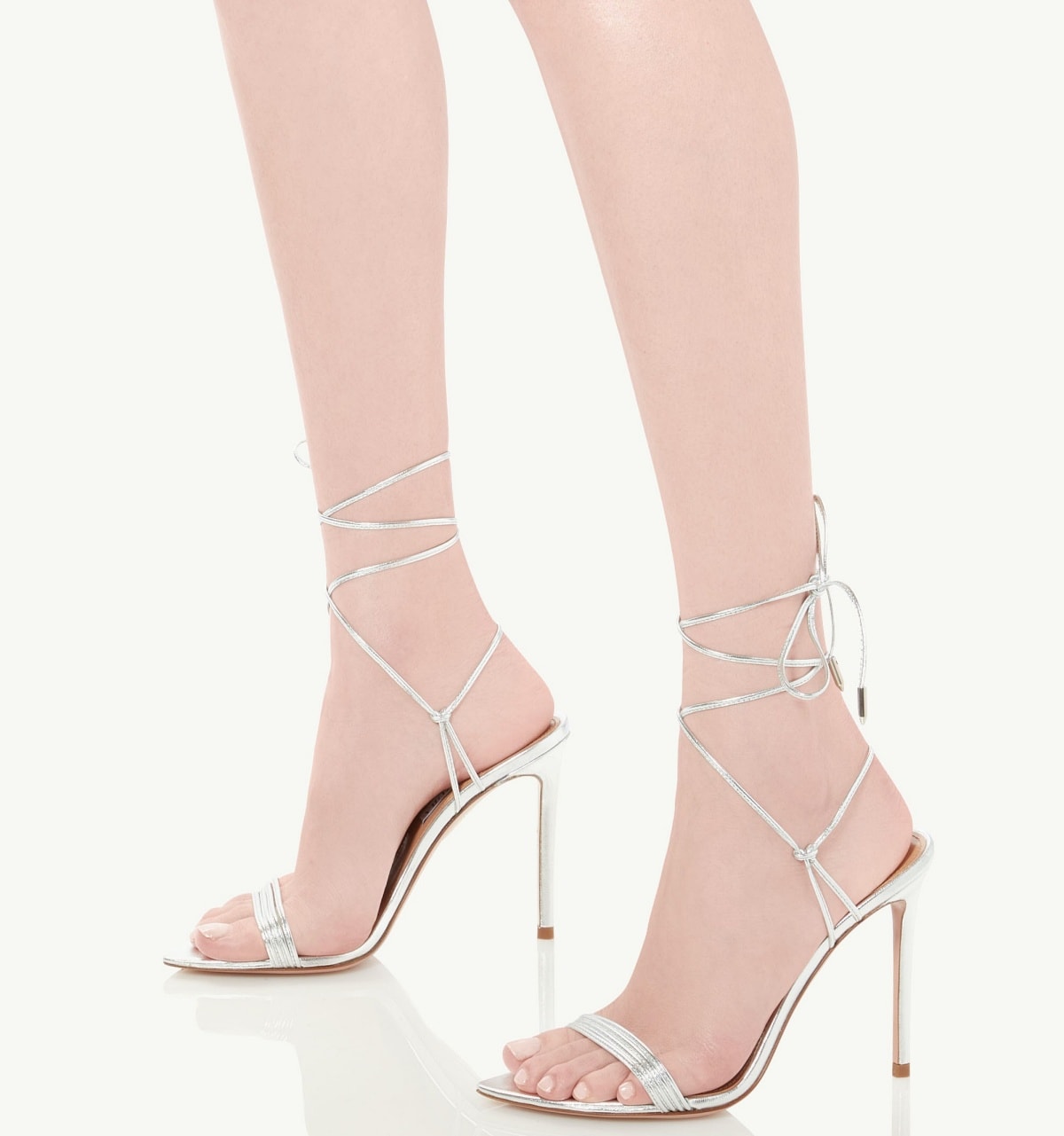 Ana talked to Seth Meyers about how filming Blonde was “very emotional, very immersive, but also a beautiful experience.”

She mentioned that it was her first time at the Venice International Film Festival, and her mother was there to support her.

The Gray Man actress also told Seth how she knew of Marilyn Monroe, but “[she] didn’t know about Norma Jeane, who was that woman playing that character.”

“When I watch it, I don’t know how to feel because of course it’s a very serious, important scene in the film. And then at the same time, I’m just looking at him and I’m melting,” Ana said about filming with Elvis.

Ana also never forgets to say a nice thing about director Andrew Dominik, who took a chance on her. She said that he’s “a fantastic director. He’s very thoughtful and very respectful. He was very passionate about this story, and he took it very seriously. He’s very detailed and a perfectionist, and so am I.”

Thank you to Banana Republic Factory and ShopStyle Collective for sponsoring this post! Fall events are in full swing, and I’ve been asked to share some fall dresses, specifically...

Is this the ultimate jean?

I haven’t bought APC jeans for quite a few years. The last pair were beautifully rigid but too boxy everywhere so I hardly wore them. But always...

Happy Thursday….you are not seeing double! This is part two of this week’s Today’s News for Women over 50. Last week, I was in the hospital and...